Read the story of Shorouq and Hala

Read the story of Shorouq and Hala

Anglicans in Development has long supported our partner in Gaza, the Ahli Arab Hospital, to implement a Child Nutrition Program for underweight children, often with multiple related health issues. This year, the project added a component of empowering the children’s mothers, as well as other vulnerable women, with vital health and gender information. The project has been renamed, “Gaza Gender and Nutrition Project”.

Shorouq is a 28-year-old woman who lives in one of the most marginalised and vulnerable areas of the Gaza Strip, where people can’t access even the most basic services. Its one health centre has a shortage of basic equipment, medications, and health staff.

Shorouq is pregnant and a mother of three children. This year, the Ahli Arab Hospital screened Shorouq’s two-year-old daughter, Hala, for malnutrition and then enrolled Hala in the nutrition program for three months.

Shorouq was living in a deteriorating social and economic situation. Her husband had been in an accident that had affected his mental health. As a result, he had become nervous and violent towards his family.

“My husband is unemployed, and we are living in deplorable conditions,” says Shorouq. “We are unable to meet our fundamental needs. We are completely reliant on UNRWA [the United Nations Relief and Works Agency for Palestine Refugees] for food assistance, which is insufficient because we also require medicine and cash to purchase other necessities.”

Shorouq had heard about the free nutrition program that the Ahli Arab Hospital was implementing. “I immediately went to the community organisation where the Ahli staff were receiving the children and performing basic measurements such as weight and length and hemoglobin tests. My daughter was diagnosed with moderate anemia, mild stunting, and mild wasting.”

“The Ahli was a compassionate and delightful place for us,” Shorouq continued, “as they cared for my daughter and provided us with the necessary medications, vitamins, and nutritional biscuits that supported her quick recovery in a very short period of time.”

During 2022, the Ahli Child Nutrition program added a “women-to-women health approach”, hence the change to the project’s name. About 12 women from each vulnerable district were trained as community mobilisers. Their training comprised topics such as communication skills, community emergency management, disaster risk reduction, protection mainstreaming, public health, self-care, self-esteem and self-assertion, child health, nutrition and food safety, women’s rights, and gender-based violence. The women who were trained as community mobilisers then passed their knowledge and skills onto selected vulnerable women in the communities. 150 women were selected this year from two of the most vulnerable districts in Gaza, based either on their vulnerability or whether they were mothers of children in the child nutrition program.

“For my daughter, as well as on my personal level, I acquired more and more knowledge. My health awareness increased through the woman-to-woman approach. The community mobiliser visited me twice a month, correcting misconceptions and wrong health behaviors and improving communication skills, gender, and protection concepts, as well as other important topics. All of this knowledge and skills positively impacted my life,” said Shorouq.

“I had been seeking protection from my father if there was a conflict with my husband, but unfortunately, my father never ever supported me and didn’t do me justice because he has a traditional mindset as we live in a patriarchal community. He always said, ‘You have to listen to your husband whatever he says,’, even though my husband abused and violated me,” Shorouq added.

“After participating in the individual awareness workshops, I became stronger. I feel I can face the injustice and violence that may occur, and I can protect myself alone”.

“My awareness of my rights and responsibilities has been raised, and I am capable of solving my problems alone. Now, I have a good communication channel and dialogue with my husband, without asking care from my father. I succeeded in changing some negative behaviours for myself and my husband such as helping me with the housework, because I have a risky pregnancy. I also raised his awareness about the violence and how it will negatively impact our life and our children’s behaviour and that it is important to maintain a safe and loving environment for our children.

“I reflected all of the concepts and knowledge that I had actually received to my husband,” Shorouq added. “We now have effective participation and management in our lives. I have full financial control since I manage the available budget depending on our requirements and priorities. This has never happened before.

“Many thanks to the Ahli and to AID, and all the people who care for vulnerable groups and provide assistance to the needy,” she remarked graciously.

During 2022 the program supported by AID at the Ahli also treated 100 malnourished children and facilitated 600 follow-up visits by the children and their mothers to the hospital.

Anglicans in Development would like to thank the supporter who gave a generous bequest for this project, as well as other supporters who have given generously over the years so that vulnerable Gazan women like Shorouq may be empowered and their children given a much greater chance of a healthy life. 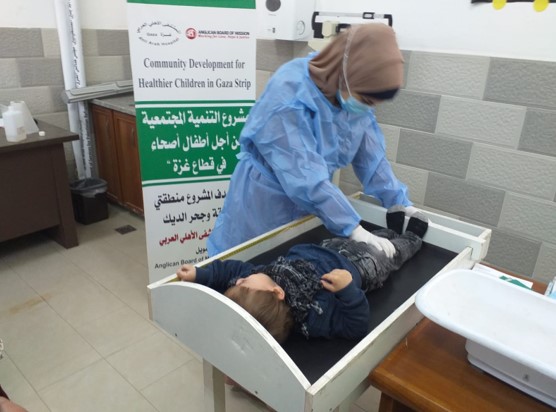 Child is screened for malnutrition at the Ahli hospital in Gaza © Ahli Hospital. Used with permission. 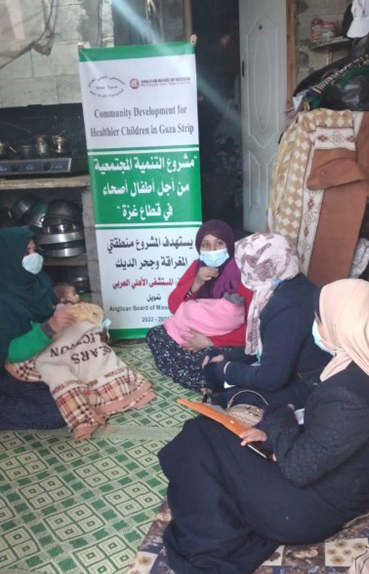 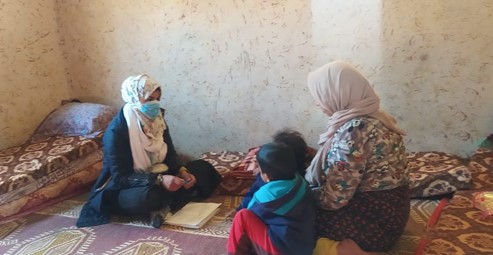 Women receive nutrition training in their homes from the community mobilisers.