Over those 25 years, the nature of the partnership has blossomed in ways that could not have been expected at the beginning. Perhaps most significantly it is the fact that the ECP has now moved to a place where it no longer requires financial support from ABM as the principal means of partnership. In its place, the ECP seeks to work closely with ABM in supporting the capacity building of other partners.

While in Australia, the delegates met with the ABM Board and were able to visit a number of ABM supporting parishes – their time with us was deemed to be productive and generated much goodwill.

ABM looks forward to a continued and mutually rewarding partnership with the ECP.

National Auxiliary during their annual conference in Sydney

On Tuesday, 10 September, ABM Board member, Colin Bannerman and his wife, Lyn hosted an informal dinner at their home where a gathering of around twenty-five local ABM supporters had a chance to meet Bishop Brent and Bishop Nestor. Guests included Bishop Mark Short of Canberra-Goulburn, retired Bishop Sarah Macneil, retired and local clergy and supporters.

On Thursday 12 September, Bishop Brent and Bishop Nestor met with and spoke to members of the National Auxiliary during their annual conference in Sydney.

National Auxiliary during their annual conference in Sydney

Our partners were welcomed at a small gathering in the ABM office on Thursday afternoon.

On Friday 13 September, ABM hosted a dinner where Bishop Brent, Bishop Nestor and Atty Floyd were the guest speakers. It was a great celebration of the 25 years of partnership between ABM and the Episcopal Church in the Philippines.

ABM Board and Supporters Dinner Sydney 1

ABM Board and Supporters Dinner Sydney 2

ABM Board and Supporters Dinner Sydney 3

ABM Board and Supporters Dinner Sydney 4

The visitors joined the congregation and local Filipino community members at St Luke’s Church in Enmore on Sunday 15 September. The service was followed by Pot-Luck lunch and everyone enjoyed the display of traditional dancing accompanied by the playing of gongs. 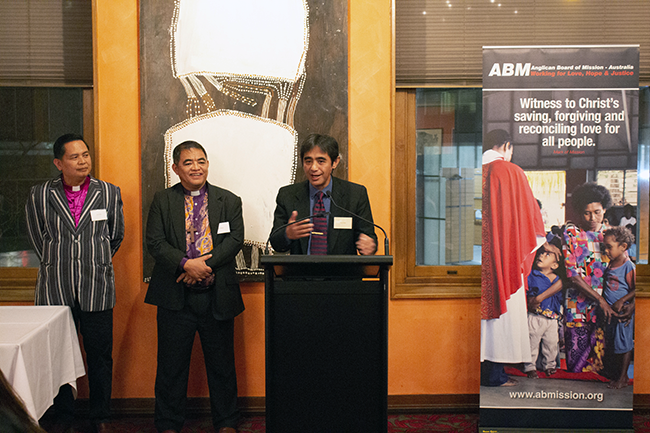 Visitors from the ECP, Bishop Nestor Poltic, Bishop Brent Alawas and Floyd Lalwet at the ABM Dinner in Sydney.