Project aim: to improve literacy and numeracy skills as well as improve water and sanitation across targeted communities.

Hellen was a 36-year-old marketplace vendor. Inspired to help others, she attended a course in Luganville about how to teach literacy and numeracy. She returned to her community – an Adventist community called Malao – to work as a volunteer teacher.

Helen explained, “This program helped me to understand better the needs of those with low literacy. I learned to have patience with those learning … I am pleased with changes that occur in lives of vendors, especially with understanding numbers.” Helen also said she used her new teaching skills to help her own children with their schoolwork.

Hellen’s experience was one of many stories heard about the impacts of our Water, Sanitation, Hygiene and Literacy project in Vanuatu during a project evaluation commissioned by Anglicans in Development in 2021. 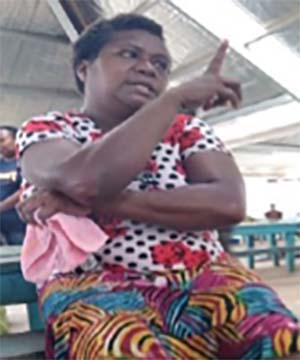 Hellen, a vendor from Malao who became a Literacy teacher

ACOM Vanuatu’s WASH-Literacy Program from July 2016 – March 2021 reached 37,478 people across 24 communities in the provinces of Torba, Sanma and Penama in Vanuatu.

The church-based delivery structure was appreciated by communities. In particular

100% of people interviewed as part of the evaluation were able to identify at least one aspect of the WASH (cause, effect, impact) and stated that their understanding had increased as a result of the program. An elderly woman highlighted that as a result of the WASH project, she is now able to collect water right in front of her kitchen instead of walking long distances. ACOM adopted sustainability measures like building local people’s skills and working through pre-existing community groups (church groups) so they could continue to maintain community facilities after the project finished.

Both programs have increased the participation of different groups (women, youth and people with disability) in community activities, including by conducting vulnerability and capacity assessments, awareness raising, training and workshops, on-the-ground actions, and decision making/governance structures established or strengthened to manage community involvement and increase community ownership.

Women in particular were given opportunities to be involved in meetings and take part in decision-making processes including raising concerns about how the program can better support them. The program ensured engagement of the most vulnerable women, address their needs and allowed for more participation in areas that are not traditionally seen as possible for women. For instance, the evaluation findings revealed that women and girls were encouraged to participate in WASH maintenance activities together with men and boys, although such activity was originally only intended for men and boys. Women and girls engaging in such activities, this shows community strength and resilience and the likelihood of project sustainability over a long period of time.

Learners who have undergone Language, Literacy and Numeracy (LLN) programs can now lead the prayers in church, read bibles, read responses and further translate this knowledge to their families and children at home. For children, it was noted that their behaviours have changed, as they learn to read and write and understand the content of what they read. Through the LLN programs in Wasaga community, learners were able to teach other community members to build their own house, tables and stools because they could now read and understand instructions. Community members have become more participatory in community meetings, including taking part in decision-making.

One respondent said the community’s market vendors were now able to understand how to count money and use numbers during their market sales.

The evaluator suggested that the program could improve in several ways:

The challenge is for ACOM Vanuatu and Anglicans in Development to follow up on the recommendations, building on the successes so far in literacy, gender equity and water and sanitation.