International Mother Earth Day is as relevant to Australia as to any other country.

On International Mother Earth Day, ABM reflects on some challenges faced by Mother Earth (and by humanity, as we are all dependent on Mother Earth). And we reflect on what ABM is doing to address these challenges.

Deforestation – both past and present – has caused many challenges. These include reduced biodiversity, reduced surface water retention and soil quality, increased carbon emissions, and increased risk of mudslides and floods. Two countries where ABM partners are combatting deforestation are Kenya and the Philippines.

In Kenya, our partner ADSE’s tree conservation is increasing shade and carbon capture and reducing erosion of fertile topsoil. Through ADSE’s program, local communities planted 6,000 trees in 2019 (roughly half of the trees were planted in primary schools). Impressively, ADSE also tracked the survival rate, although this was only around 70 % because of rain failures and a related increase in ants. Local communities planted roughly 9,000 more trees in 2020. Some of the trees provided additional benefits like fruit and oil.

ADSE also combatted deforestation in other ways. It ran training in nursery management and supported two groups to establish their own tree nurseries. ADSE also trained community members in how to construct fuel-efficient stoves. This led to the construction of 58 such stoves in 2019 and 40 such stoves in 2020. The stoves consumed much less wood fuel than traditional stoves. Finally, ADSE promoted water retention by building sand dams, farm ponds and sump wells, and by teaching farmers how to prepare hundreds of zai pits to trap moisture. By retaining water, farmers were able to green their environment.

Another ABM partner in the Philippines, VIMROD, also conducted environmental awareness trainings in 2019 and 2020, leading seven communities to conduct coastal clean-ups and to plant mangroves. Some of the communities, motivated by the VIMROD trainings, were also able to access fruit tree seedlings from their local government. This allowed them to combat deforestation and increase their food security at the same time.

In 2019, ABM also supported staff from ADSE, ECARE and VIMROD to attend a Climate Change Advocacy workshops run by ACT Alliance in Malawi and Iloilo (the Philippines) respectively.

You can see a broader cross-section of ABM partners’ environmental work in our Earth Overshoot article from August 2020.

With Australia also facing big environmental challenges, ABM continues to promote environmental awareness at home. In 2019, we brought representatives from Fiji and the Solomon Islands to Brisbane to share their experiences of climate change. We also published a climate reflection by Bishop Philip Huggins and a climate action statement by the Public Affairs Commission of the Anglican Church of Australia. In 2020 we published the study series, Climate for Change, which guides church groups to discuss climate issues.

In his 2015 encyclical “Laudato Si”, Pope Francis warned, “many efforts to seek concrete solutions to the environmental crisis have proved ineffective, not only because of powerful opposition but also because of a more general lack of interest.” ABM, our partners, and indeed people across the world must continue to address the crisis faced today by Mother Earth.

After all, we have only one Earth to bequeath to our grandchildren. 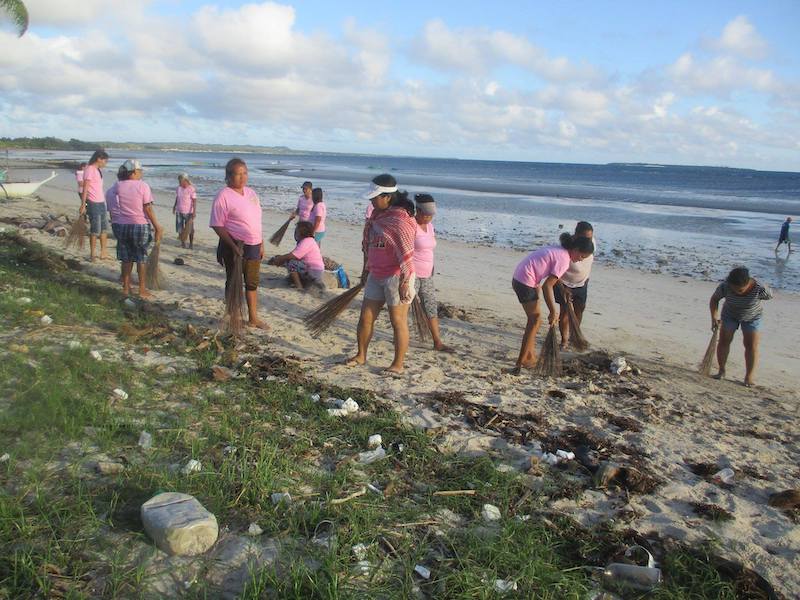 Women cleaning up their local beach: An ABM-funded project in Santa Fe, the Philippines © VIMROD.