“Gender Action Groups” is the name given to the Zambia community volunteers upon whom much of the success of AID’s Integrated Gender Project depends.

These women and men volunteer to learn skills in gender, gender-based violence (GBV), pyscho-social counselling and para-legal training, to equip them to be at the frontline of changing attitudes and behaviours in their local communities regarding women’s equality and gender-based violence.

AID’s partner, ZACOP, is taking the program to two new communities this year, one in the Sinda District, located in Eastern Zambia, and the other in Chipili District in the Anglican Diocese of Luapuala, in the country’s north.

After consulting with the communities and all the local stakeholders, including Anglican and other churches, government agencies and gender-focused organisations such as YWCA, one of the first activities of the new phase of the project was to provide training to new Gender Action Groups.
In Sinda District, 26 people volunteered to form a Gender Action Group – ten women and 16 men. The group comprised members of Anglican, Catholic, Baptist, and Reformed churches and included village headwomen and men, church leaders, two people with disabilities, and young people.

This group was given training in Gender and Gender-based Violence.

In opening the training, Bishop of Eastern Zambia and ZACOP board member, Bishop William Mchombo, encouraged participants to be role models and champions of change in the community and to work together and fight gender-based violence. He emphasised that he church sees fighting GBV as very important since it is a vice that affects the well-being of everyone – the church and community.

During the training, some of the church leaders commented, “We will support victims of gender-based violence by influencing people through our teaching on the consequences of GBV and by acting as role models.”

Some of the village headwomen and men commented, “We need to be on the lead by identifying potential risks in different villages in the catchment area to prevent violence and harassment. We also need to protect the victims of GBV especially children and women from further harm by quickly reporting the abuse.”

The headwomen and men further acknowledged they would need support from appropriate service providers to help survivors of GBV and that measures would need to be put in place to punish or charge those found perpetuating GBV. The also noted their own role in coming up with rules to be followed by everyone in order to prevent GBV.

As well as this broader training in Gender and Gender-based Violence, ten of the Sinda District Gender Action Group members received training in psycho-social counselling. This involved
ten days of intensive face-to-face training, followed by 30 further days of “practicum” where the trainees undertook supervised practical work in their local clinics. Once qualified, these village counsellors will be deployed to provide counselling and referral services to victim/survivors of Gender-based Violence. 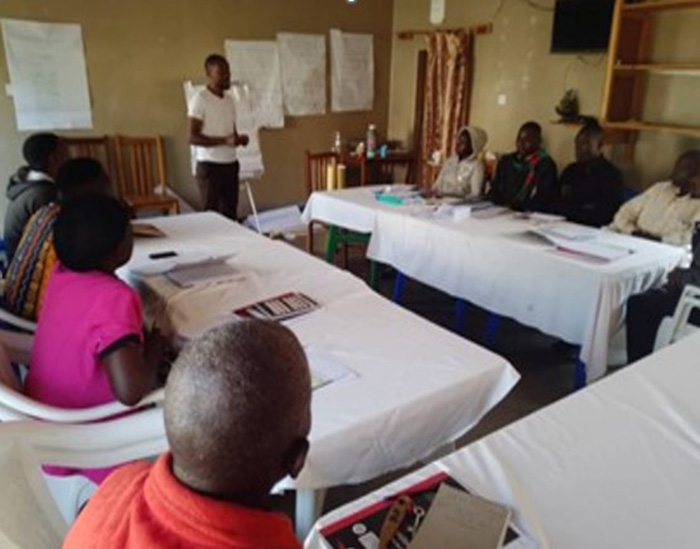 Participants at the Psycho-social Counselling training © ZACOP. Used with permission