Strength of Women Working Together

Strength of Women Working Together

Last year we brought you an interview with Josephine Mutava, Chair of the Kiangini community-based organisation in Eastern Kenya’s Makueni County. Now Josephine speaks again. As well as chairing Kiangini CBO, which is made up of almost 20 separate “self-help groups”, the 67 year-old is herself a member of Syethe Adult Self Help Group, which has its own Village Savings and Loans group. This is a story of how with a little support, communities can work together to lift themselves out of poverty. Josephine begins her story by appreciating the funds ABM/AID sent for recent drought relief in her village, thanks to generous support of our donors.

Josephine says, “Given the opportunity I can narrate about ADSE (AID’s partner in semi-arid Easter Kenya) for many hours. ADSE and AID have been of great help to our Kiangini community. We can’t forget the recent relief food which was given to 200 of our most vulnerable households during the drought. This was really important, as a majority of them were going for days without food. The disabled and the aged were very happy to receive 10 kilos of maize, five kilos of beans and two litres of cooking oil each.

“I am a member of Syethe village savings and loaning scheme. The first time, I took a loan of 4,750 Kenya shillings (about $57) which supported me to clear school fees for my grandchildren. After repaying this loan, I took as second loan of 7,000 shillings ($84) which I used to buy cassava stems and to preparing the farm. After a month I repaid this loan then took a third loan of 10,000 shillings, which am currently repaying.

The money was used to buy pasture for my cattle during the dry season and materials for making necklaces for additional income generation during the drought. The Village Savings and Loan groups have really uplifted our lives, especially the women.

“I attended ADSE training on good agricultural practices and growing drought-tolerant crops. I now grow drought-tolerant crops like cowpeas, green grams (lentils) and sorghum. My production of cowpeas and green grams has multiplied about tenfold. And I also now grow 150 kilos of sorghum, which I didn’t grow before.
“But I don’t sell those crops straight after harvesting – I store the food for use by the family.

“Recently, I also started growing cassava. In the whole of Syethe Village I am the only one who has cassava in their farm. It is really a good crop for the dry areas. So far, I have been able to make total sales of 16,750 shillings (over $200).

“I sell the cassava direct from my farm to both businesses and individuals because, during the trainings, I discovered that cassava is not only a drought-tolerant crop but one which yields a lot of money. So I used that money to repay my loan, and with what was left I bought necessities for my family.

“I’m planning next to extend the area under cultivation for cassava from 0.25 acres to two acres, and I will encourage other group members to plant cassava so that we can be doing collective marketing together.”

Josephine concludes her story by expressing how unusual it is for a woman to be voted as Chair of her community-based organisation:

“This was not the ordinary practice in our area as women previously have not been given the opportunity in leadership roles. But, after several sensitization forums, women are now being elected for leadership. Even during our meetings women are participating in making decisions and sharing their opinions’’. 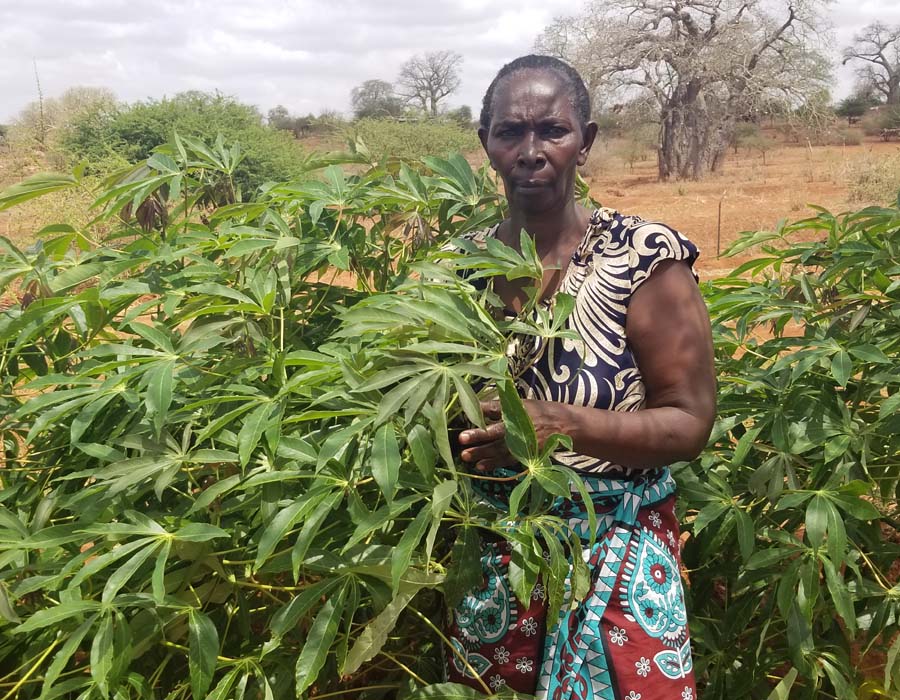 Josphine Mutava with her cassava crop