Project aim: To improve livelihoods for 38,214 people in Kiangini and Kyua Locations by June 2022.

People in Kenya’s semi-arid east improve water access, land and water conservation, and livelihoods in spite of many set-backs

38 year-old farmer, Mercy Nzilani, lives in a semi-arid part of Kenya in Machakos County. She is a member of Tila Ngukunie women’s self-help group which became part of one of two Community-based organisation formed by the project in 2018. Two-thirds of leadership positions in the project’s 38 self-help groups are held by women.

“We were trained on village savings and loaning. This has enabled us to save money where we can borrow monthly and share the money out at the end of the year,” says Mercy.

Mercy had to drop out of school and marry young because her parents thought investing in a girl’s education was a waste of time and money. Mercy is now determined her own four girls and one boy will have a good education, regardless of their sex.

Mercy joined the Tila Ngukunie group after her husband was made redundant and returned to the farm to do casual labouring jobs. Mercy’s group, like all the others, was given training in village savings and loaning (VSL groups).

“During the first share-out (of VSL profits) in 2019, I got 11,000 Kenya shillings (about $132) and used half of that to buy two goats since we had been trained on the importance of keeping goats. With the balance I bought clothes for my children. In 2020, we were not able to save well due to COVID-19 disruptions. But during the 2021 share-out, I got 23,000 shillings ($275) and was able to pay school fees for my two girls who were joining Form 1.

“Then ADSE trained us the construction of energy-saving jikos (stoves) and I have constructed 53 jikos in our neighbouring community at 1300 Kenya shillings per jiko ($15.50 each). This has helped me get an income to contribute in the VSL and repay the loans. These jikos use less fuel and less time and have helped to minimize cutting down of trees, thus helping in environmental conservation.

“Through project linkages with the County Government through the Ministry of Agriculture, and training by ADSE on resource mobilization, our group submitted a proposal for the Kenya Climate Smart Agriculture Project where I obtained 70 improved chicks and one goat from the group support. We have been trained on poultry keeping and I will be able to keep them and sell them to get an income”.

Mercy is very satisfied with what she has gained from the project, and is grateful to ADSE, ABM AID and to the Australian Government’s ANCP program.

“Since the project came to the area, I feel I will be able to have my dreams come true of seeing my children through school and enable them to have a decent life, which I was not able to get”, Mercy concluded. 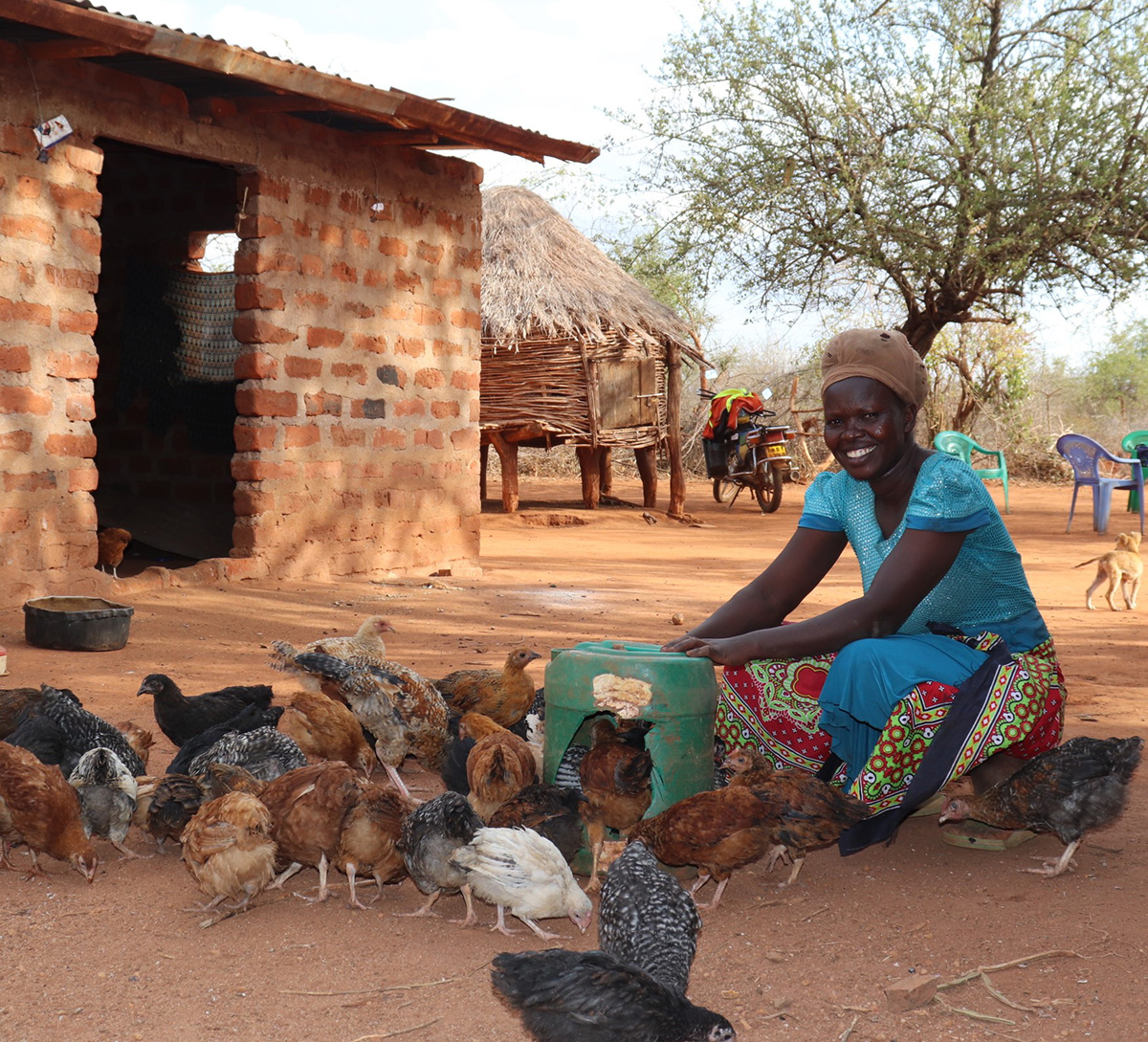 Mercy with her chickens obtained through a successful proposal to a Kenyan government grant after training in resource mobilisation by AID’s partner, ADSE. © ADSE. Used with permission. 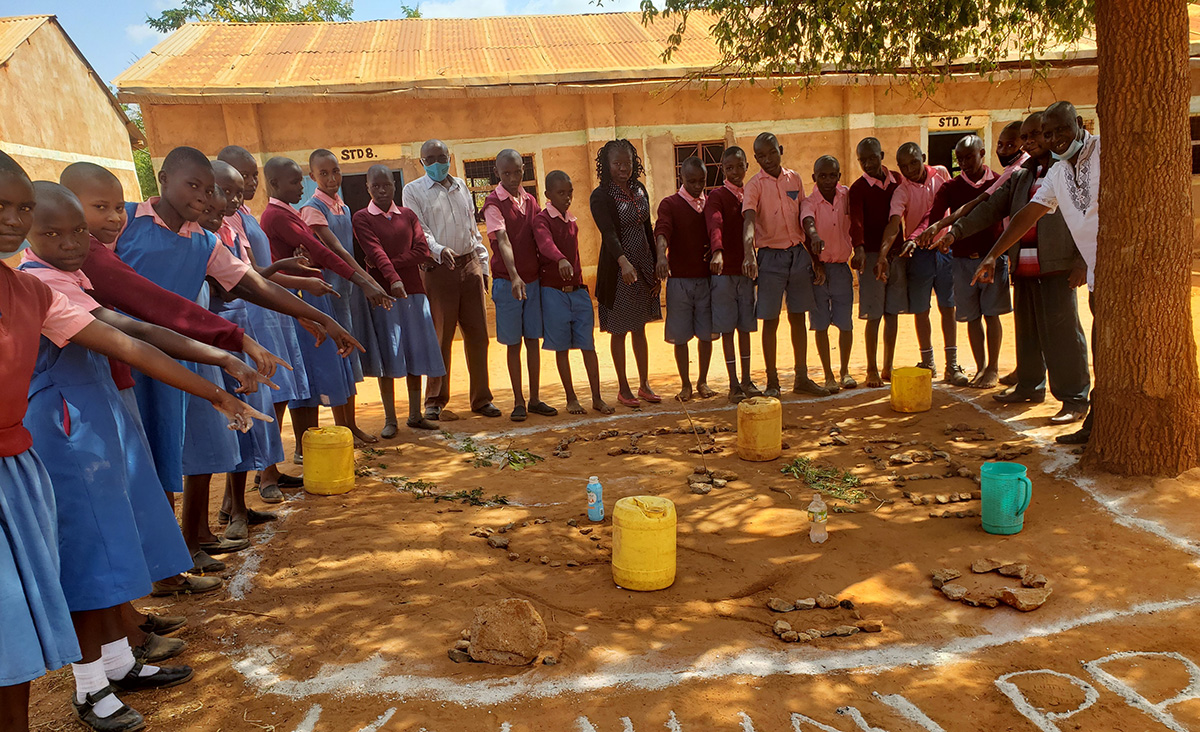 These school children demonstrate how the project has helped them with greater water access, hygiene and tree planting. © ADSE. Used with permission. 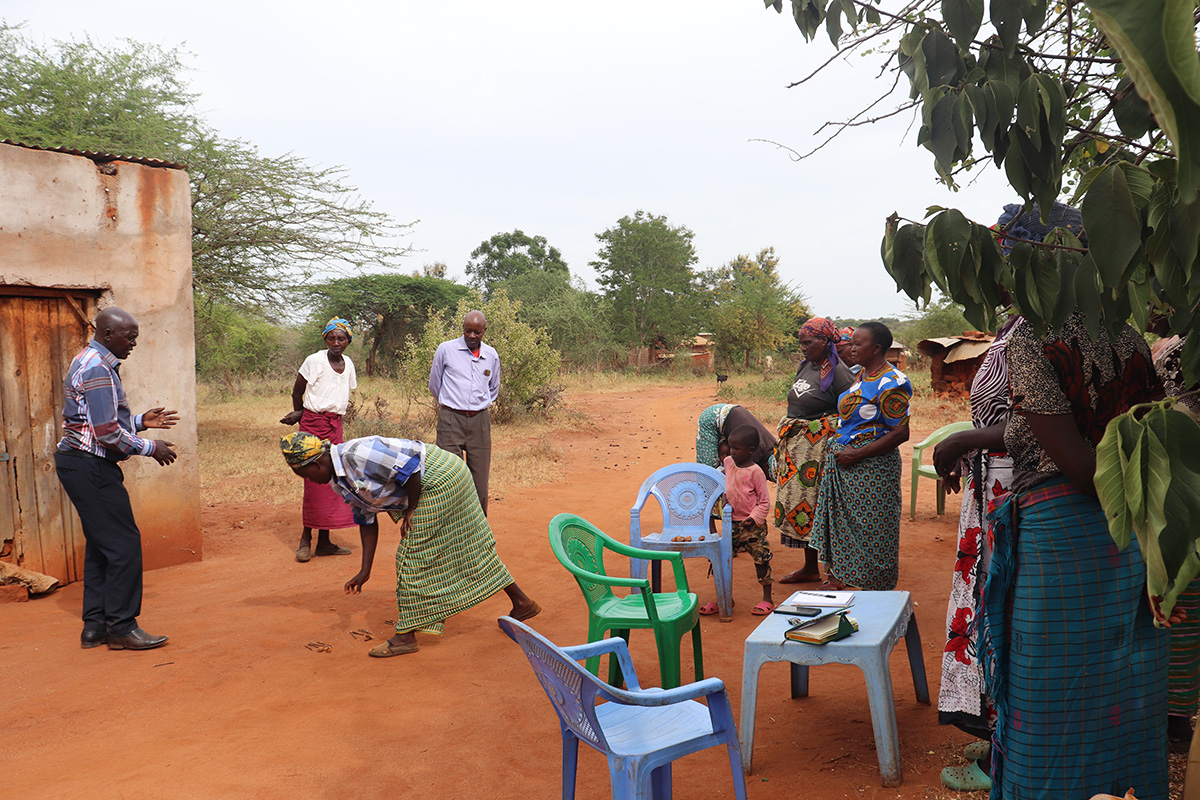 Tila Ngukune Self-Help Group demonstrate with stones and sticks the progress they have made since the project began. © ADSE. Used with permission.

Two community-based organisations (CBOs) were established in Kyua and Kiangini locations, comprising 38 affiliated self-help groups with a total of 1,050 members. The self-help groups meet frequently, have group decision-making systems in place, keep good records and have strong leadership. The groups have established strong links with the Kenyan Ministry of Agriculture, gaining access to their funding for projects. Diversified funding sources, internal resource mobilization and increased group contribution were pointers of potential evidence of sustainability efforts. The strength of the CBOs was attributed to the fact that they were comprised of smaller groups who had elected positions and active participation of their members. Two-thirds of the leadership positions were held by women.

INCREASED ACCESS TO WATER FOR AGRICULTURE AND DOMESTIC USE

Over 5,271 community members in Kiangini and Kyua locations can now access water from diversified sources with reduced distance and in less time. Almost a quarter of participants can access water in less than 30 mins as compared to only 1% before the project started. Increased access to water resulted in increased (easy to reach) water volumes which are being used for irrigation at household levels. The evaluation established that 4% of the respondents practised irrigation farming at the time of the evaluation compared to 1% prior to the project. These increased volumes of water were used for livestock, washing clothes and cooking. The women involved in fetching water now have more time for other family needs.

Over 20,320 trees were planted over the project period by project participants, including school children who had learned about tree planting at school. 90% of the households in both project sites reported having planted trees. This signified the enhanced capacity of the CBOs to conserve the environment.  A sample assessment in three schools indicated that the survival rate of seedlings was about 40%. The low survival rate was attributed to erratic rainfalls experienced in the regions, destruction caused by goats, and the presence of ants.

Almost one third of the participants had diversified their income sources (to make them less vulnerable to market shocks), while 22% of those with diversified income sources reported increased income despite income levels generally being eroded during COVID-19 and due to the unstable economy. While it is likely that there may have been other external factors such as remittances from their children that contributed to the increase in respondents’ incomes, evidence cited in the evaluation attributed the increased access to business capital that was invested in enterprises, sales of vegetables grown by groups, dividends from Village Savings and Loans groups, and sales of livestock and other farm produce as the most likely influencing factors.

The project led to increased inclusion, with 82.5% of the participants acknowledging having vulnerable persons in their groups. The project used the Participatory Capacity and Vulnerability Analysis tool that revealed the needs of the vulnerable.  As a result, men, women, boys, girls and the most vulnerable have all been involved in the project and a significant change to the barrier faced by persons with disabilities – the registration card – has been greatly appreciated. The evaluator acknowledged the project’s commendable efforts and huge changes brought about and assessed this criterion as “very good”.

The project outputs have been achieved at cost-effective manner with the budget reflecting very competitive prices of inputs used and outputs achieved. Low-cost inputs, competitive prices and use of local materials helped to provide good value-for-money, and coordination with other implementing partner staff, local leaders and external agencies has leveraged the costs substantially. Hence the project was rated “excellent” on the criterion of efficiency.

Many of the outcomes of the project will be sustained without further project support. However, the communities’ capacity to become fully sustainable needs a little more support during the next 12 months.

The most significant long-term impacts of the project included increased incomes, increased water access, and improved skills and knowledge.

The two CBOs and 38 self-help groups established were found to be permanent community structures that will continue to influence change at the household and community levels. The CBOs are sustainable because the self-help groups that comprise them have strong participation levels and enable members to participate in all decisions. The CBOs promote a sense of ownership and are proven avenues for negotiating what needs to be done in the two communities.

The 38 Village Savings and Loans (VSL) groups provided remarkable benefits to the entire household and community in terms of addressing immediate needs such as school fees, procurement of assets, and basic financial needs. The group members have easy access to credit at interest rates which are both affordable, but which give members a good yield at the annual sharing out of profits. The VSL provides a landmark in the lives of the participants.

The project has reduced the average time that households take to travel to and from water sources. The extra time at their disposal enables household members to engage in small enterprises, creates time for children to study, and enhances safety.

Kitchen gardens established by participants enable production of crops for sale and consumption. This has enhanced household incomes and increased the supply of nutritious foods which can improve the nutritional status of household members.

The project has made a significant contribution towards building community resilience via Climate Change Adaptation through the development of tree nurseries and planting of trees at schools and around dwellings.

As a result of the project, participants have a stream of income generating activities, and are earning income from the sale of such items as mats, baskets, honey, vegetables and milk among others.

Since some water structures, such as sand dams are open water sources aimed at providing water for livestock and crops and do not have distribution systems to the households (compared with the sump well and borehole water projects which have piping systems to households, schools, market centres and dispensaries) it was recommended that the project invest more in protection and distribution of water sources in future for effectiveness of the objective of providing safe drinking water to the communities. Other recommended protection measures are the planting of trees along the water sources to protect the catchment areas and conserve the environment in order to sustain the water supply.

Continue to invest in VSL groups and producer business groups for sustainability and diversity of income sources. To continue to support an entrepreneurial approach, more effort should be channelled to develop active links with larger funding/credit sources such as the Mpanzi SACCO, instead of just sharing out VSL group profits at the end of the year. This would enable them to access larger loans to invest as a group in activities that would provide greater sustainability.

Select a few of the best demonstration farms and strengthen their capacity in order to establish them as community learning centres.