What happens when an entire island is deemed uninhabitable because volcanic eruptions are depositing ash and acid rain on homes and gardens? Its entire population of over 10,000 people are evacuated to nearby islands to wait until it is safe to return home and rebuild their homes, gardens and lives. This is what happened when Manaro Volcano on Ambae Island in Vanuatu erupted in September 2017 and, more recently, in March-April 2018.

Following the September 2017 evacuations to Santo, Maewo and Pentecost Islands, ABM’s partner the Anglican Church of Melanesia (ACOM) stepped in to complement the Government response and support the evacuees and the communities that hosted them. This complementary approach continues in the current phase of the emergency.

In September 2017, the majority of evacuees, approximately 7000 people, were sent to Santo Island. As ACOM’s Vanuatu Headquarters are on Santo, ACOM focused on supporting 10 designated Evacuations Centres (ECs) on Santo. While ACOM did provide some emergency relief food plus non-food items, it identified a gap in water, sanitation and hygiene (WASH) facilities at the ECs and services around counselling for traumatised people. They improved WASH facilities at 2 ECs, located at Sarakata and Mango Parishes. In addition to the improved WASH facilities, the ACOM team invited men and women from the evacuation centre to assist with the improvement work, providing them with meaningful work and purpose, essential items to reduce trauma. To meet people’s psychosocial needs, ACOM was able to establish daily visiting programs with social activities and provided trauma counselling at seven ECs.

“The project contributed towards [the] safety and comfort, emotional relief, good health, reduced stress [and]rebuilding of spirituality [for the evacuees]…Those touched by the project expressed recognitions and praise on what and how the Church and its development partners responded to communities”.

St. Patrick’s College and Torgil Vocational School on Ambae are ACOM Provincial Institutions. The students were able to complete their academic programs at designated schools in Santo. St Patrick’s College (SPC) teachers were either accommodated with Anglican host families or received rental assistance so that SPC could continue running at the host schools and provide a degree of routine and normalcy for its students. Despite the disruptions, SPC students were able to sit exams and performed as well as in previous years, a great achievement and credit to the resilience of students and teachers.

After being allowed to return home in late 2017 to clean up and rebuild, these people are now facing permanent relocation after further eruptions since March 2018 have continued to pour ash onto the island, polluting water, killing crops and destroying houses. While some people wish to remain, the Government is encouraging them to accept voluntary resettlement on neighbouring islands.

The Anglican Church of Melanesia was involved in the initial response and continues to provide support as the evacuations resume and negotiations are underway for permanent resettlement. Since May 2018, ACOM has decided to permanently relocate St Patrick’s College and Torgil Vocational School to Santo. ABM’s supporters responded generously in September 2017 and ABM has committed funds for an ongoing response in 2018.

The experience gained by ACOM in the response after the September 2017 evacuation is being put to good use as the emergency develops. People will need assistance to be resettled with as little disruption as possible, especially to health and education services.

ABM wishes to thank all those that contributed financially to this appeal. Your prayers are still needed as the people of Ambae and their new home islands work through the difficult process ahead of them. 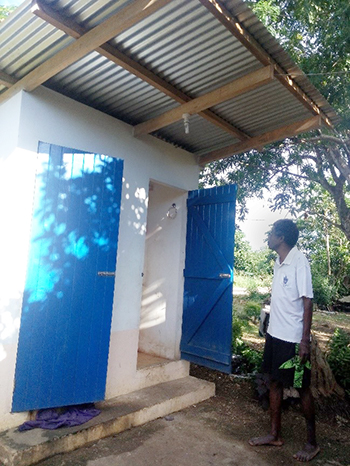 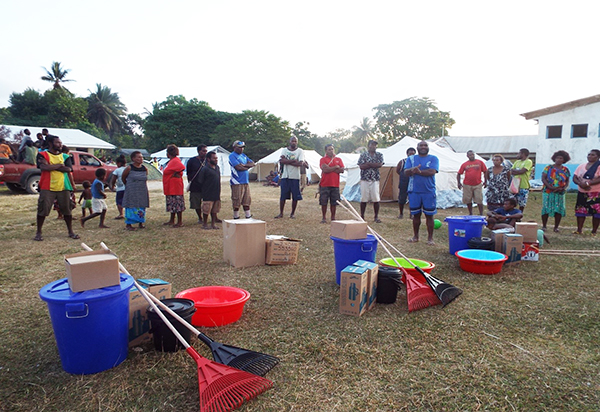 Repacking and distribution of relief supplies in Santo. © ACOM Vanuatu.