In mid-2021, as Gaza struggled with COVID-19 and ongoing political tensions, the Ahli Hospital took on a lesser-known problem – children’s health – and they did it by mobilising women.

By March 2022, the new program had notched up some impressive achievements.

258 children had been screened by measuring their weight, length, and haemoglobin levels. 100 of these children – those who suffered most from malnourishment and stunting – were selected and given in-hospital treatment as well as 600 follow-up home visits.

For the 100 children, the Ahli recorded their malnutrition and stunting status before and after being discharged from the hospital (see figures 1 and 2).

The Ahli then produced 500 personal hygiene posters and 500 nutrition booklets and had already distributed more than 200 of each in communities.

25 female community leaders from the two communities were trained in a wide range of health and community development issues (including problem-solving, nutrition, women’s rights, public health, disaster risk reduction, and self-confidence). Ten graduates were then selected to become community mobilisers.

The ten community mobilisers attended orientation meetings with the Ahli Hospital’s nutritionist and paediatrician. They prepared an action plan for community visits, including women-to-women household visits.

By March 2022, the ten community mobilisers had conducted 600 awareness and empowerment sessions for 150 vulnerable women across the two communities. They had also formed a WhatsApp group to facilitate communication amongst themselves and with the support team at the Ahli hospital.

Starting this July, with your support, the Al Ahli Hospital hopes to broaden this project to new communities in Gaza. Health awareness is spreading… and women are leading the way. 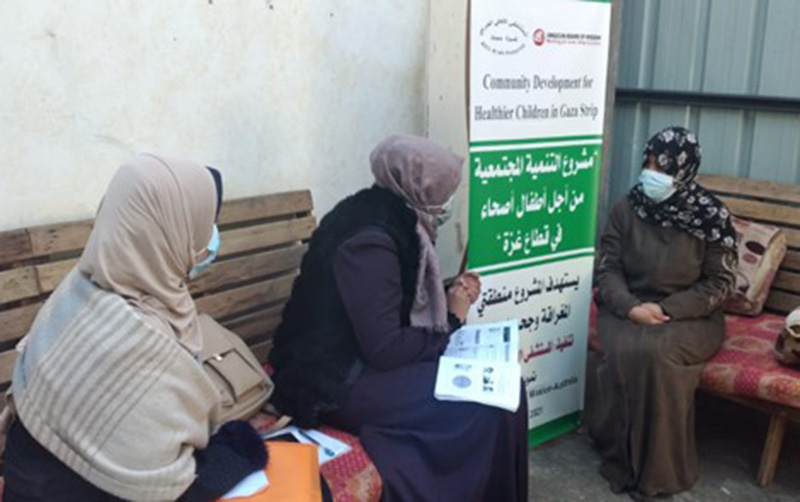